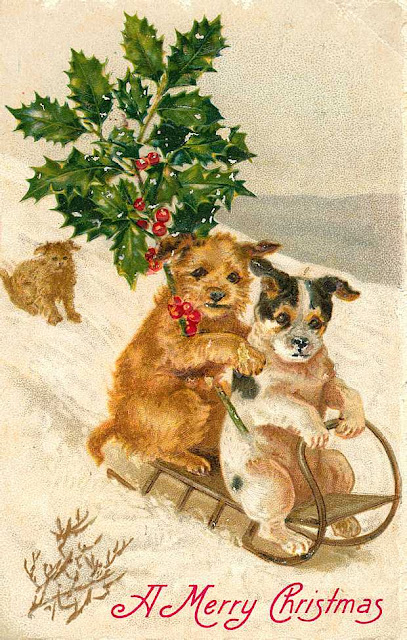 For those not in the know, a "foster fail" is what happens when a dog or cat who was only supposed to be a temporary foster is so lovable that his/her human just can't say goodbye, and he/she winds up becoming part of the family.  So basically, it's the best kind of fail :)

I have been fostering for well over ten years.  I have come close to adopting before, but never made the commitment.  I knew if I did not adopt Molly, I would regret it, so she is officially a member of my family. 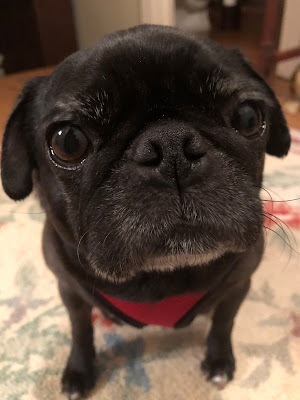 She is my shadow.  Here she is while I am typing this post.  I will never again go to the bathroom alone :) Molly and Ernestine.  Molly looks like a little peanut compared to Ernestine. 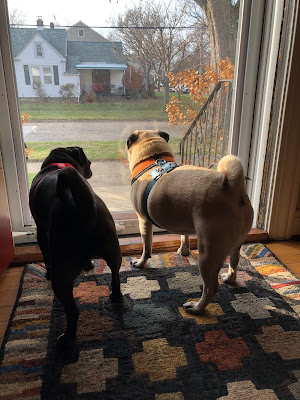 Here they suspect food may be close by. 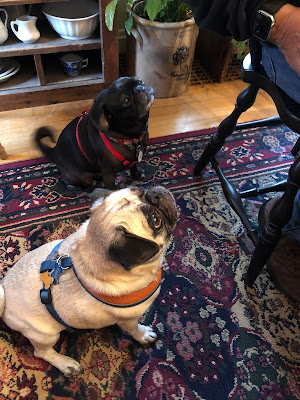 Molly with younger son J. He calls her little puppy (but that is also what he calls Ernestine).  He has the beginnings of his "winter face". 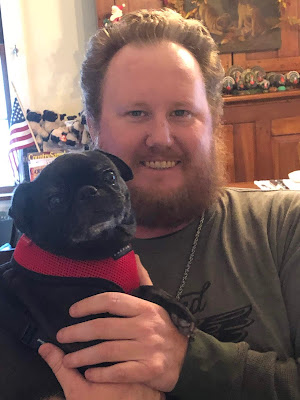 Older son Bill with niece's dog Izzy.  They look pretty comfy, though Bill claims he was just resting his eyes. 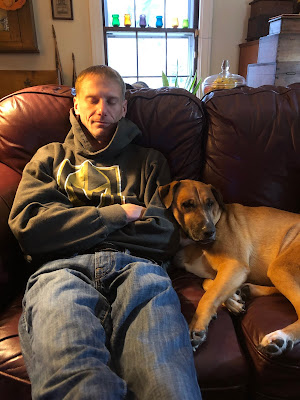 Grandson Jake with his Uncle Bill.  Jake is now officially taller than his dad. 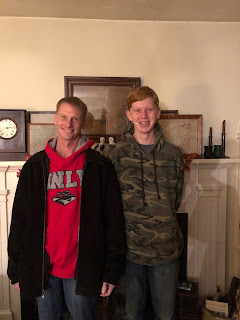 I survived Thanksgiving.  Thankfully my niece's hubby is a great help in the kitchen so he was in charge of the turkey and gravy.  We had enough food to feed an army.  I do not eat sweet potatoes, but Marly shared a sweet potato casserole recipe with me which tasted more like a dessert.  I must say it was pretty good.  You can find the recipe here.  Thanks for sharing, Marly.

Thanks so much for stopping by.
Pug hugs :)
Lauren
Posted by Rugs and Pugs at 8:00 PM

Wow! Was not expecting the great news! You've spoken about other fosters that were so sweet and lovable, Molly must have stolen your heart. Congrats! So glad you enjoyed the holiday with those good looking guys.

I am sure Molly is happy that you couldn't resist, she is a sweetie.

Awwwww....funny how those little furballs can melt a heart! Congrats! And, congrats on a full Thanksgiving!

What a wonderful holiday gift she is such a sweetie......congratulations! She is blessed to have a wonderful home and family..........

That sweet face! How could you resist that face?

How wonderful for you both!!
Looks like Thanksgiving was fun.
Cathy

Molly is an adorable looking pup. Glad you had a wonderful Thanksgiving with family; I LOVE sweet potatoes and have even eaten cold baked sweet potatoes (with skin) as I consider them sweet potato pie without the fattening crust and sugar.

I am so happy to hear that Molly is a foster fail!!! That face :) Congratulations! It looks like she and Ernestine get along well!
Blessings, Patti

Molly has found her forever home !!!! Lucky little pup !!!! She will make your life even more special !!!

Oh, Lauren, Molly looks like such a sweetheart! She is so lucky to have you as her momma. She will have a wonderful life with you. Congratulations!!

Such wonderful news! Little Molly must be so special to have captured your heart. You are both so lucky to have found each other! Guess it was meant to be. I'm happy you had a nice Thanksgiving with your family. Good that Molly and Ernestine like each other. Melinda

Congrats Lauren. I told Gary as soon as I saw Molly that she was a little baby doll and if she were with us she would be a "keeper." So glad she is your "keeper." She fell into a home full of love for sure. Merry Christmas to you and yours.

So happy for Molly & you! Best decision & Christmas for both of you! Looks like she is part of the family already & fitting right in!

Congrats!!! She looks like a sweetie!!!! Had a black pug named Martha many years ago, loved her to bits!!! Enjoy your new baby!!!

Molly look right at home. Congratulations Molly!!! You have a forever home ♥️

Jake has grown so tall! What a cute member of your family.

Lucky Molly!! I a so happy for both of you . And it looks as though even Ernestine approves, Your grandson has turned into quite a handsome and tall young man. Glad both of your boys were home for the holiday.

I am so glad you are keeping Molly. When I read the title, my heart fell in my shoes. She seems like such a nice dog. I am glad she has found her forever home. I am also glad that Earnestine and Molly seem like friends.
I remember when one of my friends raised guide dogs, it was a fail if you got your puppy back. I knew then I could never do that, because I would want them all to fail.
I know I could very easy end up a hoarder. Your Thanksgiving looks amazing and I am so glad your boys were all home. My goodness Jake has gotten so tall. I am so happy you have a dog to sleep at your feet again.

Molly loves you. I am so happy you are keeping her. She is gorgeous!! A great addition to your family.