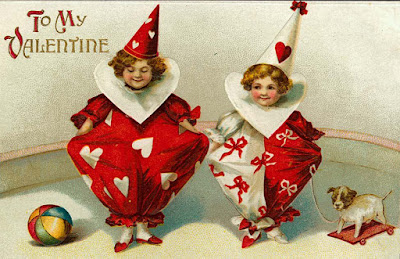 Cindy Lou Who is now officially a "bed dog".  It was only a matter of time.  This morning after I got up, did a couple things, I went back to get her and this is what I found. 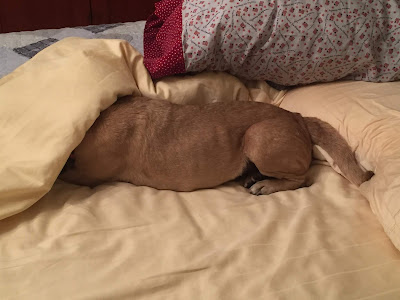 Also, after she had refused to drink water from her bowl for weeks, just yesterday she started drinking it once again.  I don't know why it would make a difference, but could it be related to the fact that she is finally off the antibiotic?

DSO got a new toy.  We picked it yesterday and the weather being so springlike, he got to take it for a short spin before leaving the dealership. 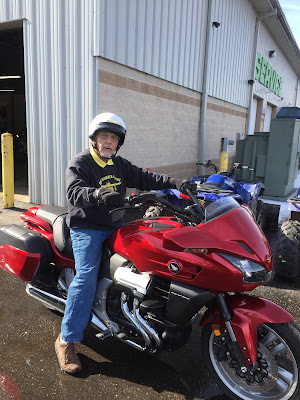 When my son asked what he was doing with his old bike, DSO said he was trading it in.  Son J said he would buy it.  Now, he already has a Harley which he loves dearly.  When silly me asked why he need two motorcycles, he said in case one is down for repairs, he still has one to ride.  The difference between men and boys . . . 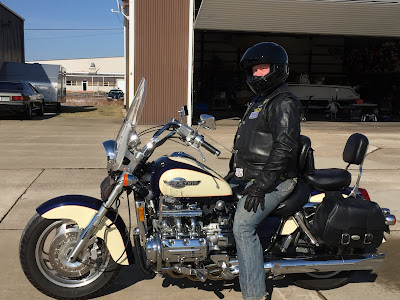 I have not yet finished the give-away heart, so I have not yet chosen a winner.  Hopefully soon! I will accept entries until 8 pm this evening.
Thanks so much for stopping by.
Pug hugs :)
Lauren
Posted by Rugs and Pugs at 2:40 PM

Well, my guys and girl know that I won't allow them to ride motorcycles. lol! The prohibition might not work, but so far so good. :D Love that pic of Cindy Lou Who. So cute!

Hey woman, don't challenge men for wanting another bike 'in case the other is in repair' because I have more than one rug frame for "just in case" I need a back up for a back up. See... it's not only men and their toys but women and their toys.

That looks like two happy men!!! we have had beautiful weather the past two days high 50's now we are going into the cold and an ice storm wed night into Thur.
cathy

Wow. That's a beautiful ride. Love the red. Wish I wasn't a chicken. You need to buy a guardian bell for both!

She is so cute and silly, glad to see she is coming into her own, now that she is feeling better.
Nice bike, been years since I have been on one.

The men love their bikes, don't they? Goodness, that red one looks like a big bike. I'm never comfortable driving behind a motorcycle. I'm always worried of accidentally running into them.
That bed photo of CLW is too cute. It reminds me of my little dog that we had that always covered himself under the blanket, only he covered his butts and only showed his nose.
Hugs, Julia

I can see how having two bikes makes perfect sense. I love that picture of Cindi Lou in bed. I am so glad she is acting like a cute dog that she maybe never got to be in her life. I am so glad she has you.
It sounds like a fun day.
Have a nice evening

WOWSER - what a snazzy new bike ! I have always been afraid of motorcycles. My DH always had dirt bikes and other bikes when he was younger but now way I am going to encourage it now. People drive too crazy.

That little pugster is so cute. Baby it's cold outside and she is in her warm bed.

If it's not too late to get my name in the hat for your beautiful pink applique heart I would like to get a chance. Love the buttons.

We missed you at camp - I keep trying to find the time to post about it but now I can't download my photos from my phone, it keeps hanging up on the download. (sigh)
take care Mel

What an adorable picture of CLW! Made me giggle! Janice

PS....Either of your guys want another Harley??? We have one in the “collection” and I really rather not have either of mine on it....Three things I learned in my brief stint at a personal injury law firm: (1) Increase the amount of your uninsured motorist insurance (2) always wear a seatbelt and (3) never ride a motorcycle..... ;-)