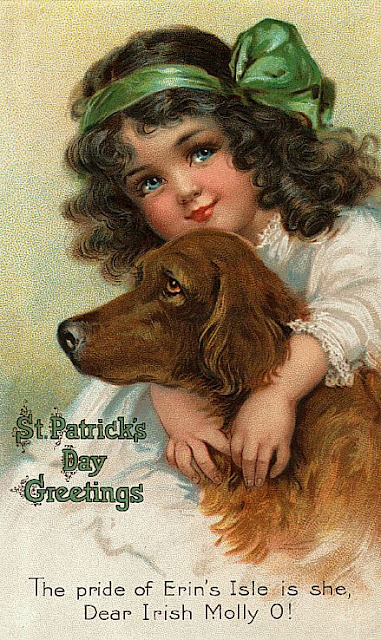 DSO is off to California visiting his son and d-i-l for 8 days, so Cindy and I have a houseguest, Ernestine.  They get along great . . . 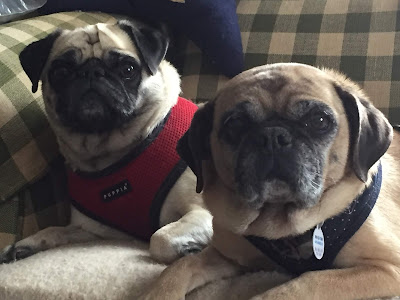 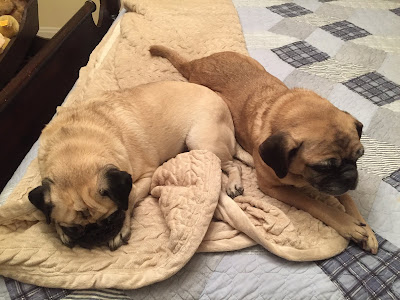 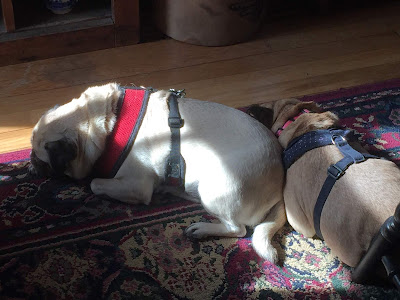 . . . except at mealtimes.  I hate to point the finger, but it's Ernestine who has some real food aggressions.  The food bowl doesn't even have to be on the floor.  She just has to feel threatened and she will go after Cindy with a vengeance.  Cindy does not put up with it, so there have been some knock down, drag out fights.  I am doing my best to avoid a problem.  I have to keep them out of the kitchen when I am getting the food bowls ready, then totally separate them by a baby gate and not allow them to see each other while eating.  Fingers crossed.  So far, so good.
LOVE those pug/puggle butts :) 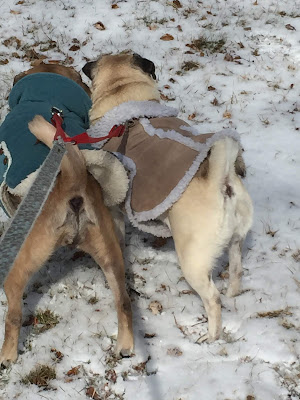 I so enjoyed the first two little mug mats that I appliqued, that I did two more.  {If you did not see a previous post, these are door prizes for the Western Reserve hook in.} 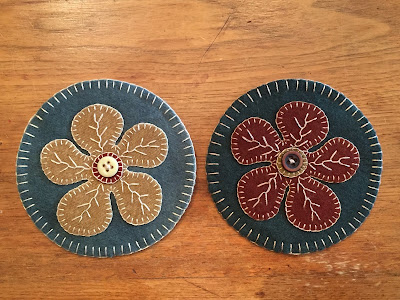 We were asked to label them, so I just made some very simple ones. 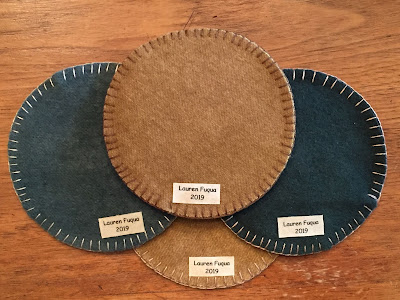 I decided to start another wool applique project.  This a free Rebekah L. Smith pattern in the December 2014 issue of Early American Life magazine. 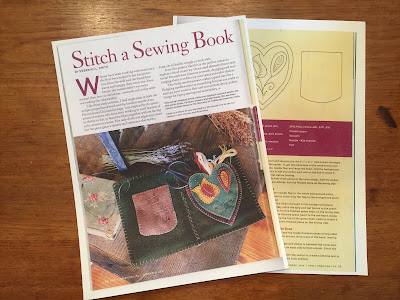 I will choose from this pile of wool. 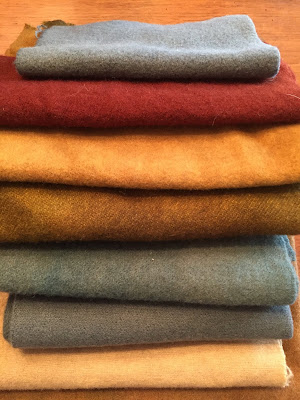 We woke to about an inch of snow this morning.  With rising temps, it is mostly gone.  My son said that his area of Las Vegas got about 2" of snow the other day.  Most unusual, he says, though not that far north they get snow on a regular basis.
Thanks so much for stopping by.
Pug hugs :)
Lauren
Posted by Rugs and Pugs at 2:20 PM

Love your pieces you have done. But I really like the free pattern.
we are in for 3-6 tonight of snow but then it goes to 40 degrees come on spring
Cathy

Oh oh...our Cocker Spaniel was food aggressive. Good luck with that. I agree, those butts are cute!Janice

Ok....are you channeling me again or am I channeling you??? I had a dr appt today (in the middle of 7-11” of snow) and stopped for some floss at our LNS on the way home....and picked up an appliqué pattern and some wool for it....Mind you....I have 101 (actually that is a way under-estimation) of patterns here that I could/should be doing, but I picked up appliqué LOL. Which reminds me that I never finished the little one I started last year some time. I love your door prizes.... The extra detail adds so very much!!! Cute butts.....and I know the feeding struggle.... my not-so-little kitty thinks he is going to starve and will push Luccifur out of her dish and eat both....I have to referee every morning and treat time.... Robin=

Wonderful wool projects and I do love her designs. I still have ones I want to make from her book.
Fun photos of the pups.

A great solution to separate the food fighters. I would have never guessed that they would be so aggressive toward their food.
I love your little mug mats. Such a sweet pattern and great door prizes... Your wool makes me drool. Such nice colors.
We will wake up to more snow tomorrow.
I'm not too happy about that but what can I do?
Hugs, Julia

The pups are so cute. Looks like Cindy is feeling well. I love the mug rugs. Amazing how that extra bit of feather stitching makes such a difference in them. Rebekah Smith does lovely designs. Can’t wait to see the next project.

Your mug mats are terrific and the wool colors you have chosen are wonderful. Did you dye them or buy them?

I love those cute dogs so much. Your projects are so nice. Yes, we have had one snowy year. I hope you have a wonderful day.

Ernestine! Behave! How sweet they look lying together.