Wednesday started off great.  There is a new ATHA guild on the west side of Cleveland, Crooked River Rug Hookers.  That morning we had our third meeting and already have close to 40 members.  That evening I had plans to drive about an hour to a stitching guild meeting where my friend Melinda of Merry Wind Farm was the guest speaker.
Now let me go back to Tuesday.  On my morning walk, without warning, I was suddenly leaning against a tree and if the tree hadn't been there I'm sure I would have fallen to the ground.  I was talking on the phone and totally lucid, but just couldn't stand on my own.  This lasted for maybe 30 seconds, then I was fine and continued on my walk.  It scared me enough that the next day (Wednesday), I agreed to have DSO take me to the Cleveland Clinic express clinic.  Well . . . based on what I told the physician's assistant, I was told I needed to go to the ER and would I like to go by ambulance since it could have been a mini stroke or bleeding?  I was nervous before, but now I am totally freaked.  Long story short, the ER did an EKG and the heart was fine.  Bloodwork came back fine.  Doctor suspects my blood sugar dropped and caused the symptoms.  Nothing neurological.  What a relief, but I did not get home in time to go to the stitching guild :(
Since we were close we stopped by a field of sunflowers, Maria's Field of Hope.  More than a million sunflower seeds were planted in the 35-acre field this spring.  This year marks the fourth year of the field.  The field is planted in memory of Maria McNamara, who died of a rare brain cancer called brain stem glioma in 2007. Her parents, Ed and Megan McNamara, started the Prayers From Maria Children's Glioma Cancer Foundation, in honor of their seven-year-old daughter.  The foundation's mission is to raise awareness for the need to cure childhood brain cancers.
Since 2010 the foundation has raised more than $1 million to fund childhood cancer research.  You can read more about it here.  We really must count our blessings. 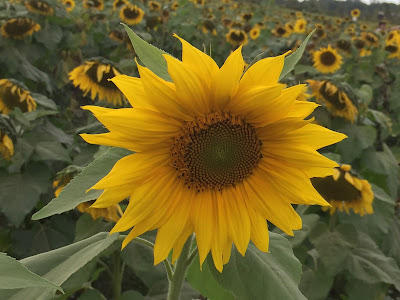 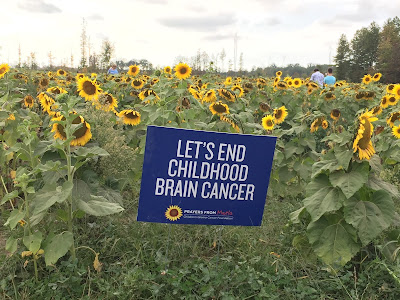 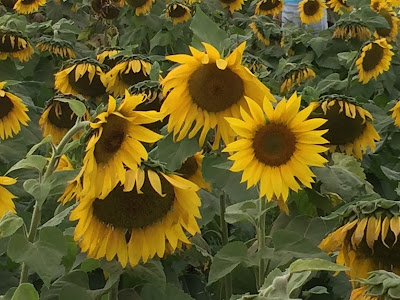 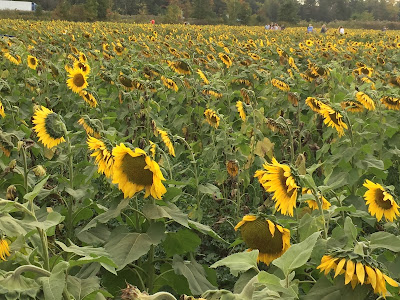 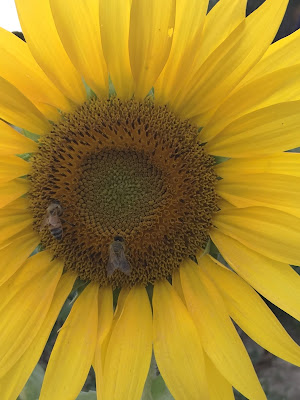 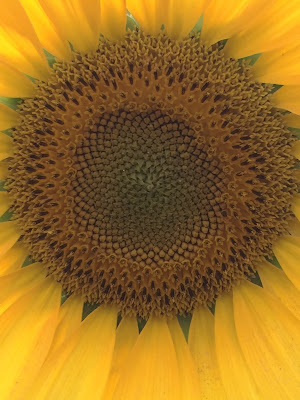 Thanks so much for stopping by.
Pug hugs :)
Lauren
Posted by Rugs and Pugs at 6:36 PM

Thanks for the plug! I missed seeing you, but happy that you are ok. Was your walk in the morning? Had you eaten anything yet? If you went on a empty stomach, that maybe caused low blood sugar. Drink a glass of orange juice! You have so many neat groups up north, I know I've said that many times before:)
The Western Reserve guild went great, everybody seemed to like it and was very complimentary. I might have some more in the works! Take care of yourself, is your new foster coming this weekend??

That is a bit scary but i tend to agree with Merry Wind Farm about the impotence of breakfast especially at your young age... hehe, I think I'm older than you and I would never go without breakfast after finishing my work at the farm in the morning. I work for about 2 to 3 hours before breakfast but I never skip breakfast....

Take care and I mean it.
Hugs, Julia

So glad nothing seriously wrong with you, and so sad you missed your guild. Sunflowers are my happy flower and what a great cause. Janice

Hope your feeling better so sorry you missed melindas talk I would have loved to hear how it went ..perfect I'm sure. Will you be going to hooked in the vallely in a couple of weeks?

What a scare!!! Glad things turned out okay. I HATE brain cancer!!!! What a beautiful way to remember little Maria.

Glad you are ok, I get spells from my lyme and sometimes if I don't eat enough protein. The sunflowers are beautiful, we have a field in Ct. that does the same thing, missed it this year.

Thank goodness for trees. If it happens again, quickly take your BP with a home cuff. Doc is probably correct but do it anyway. Because I said to.

Glad you were okay. I was told my sodium was low on my blood test and that could cause me to have dizziness so be sure that I do eat a little more salt....not a LOT of salt tho.

Lauren, happy to hear you are ok but take care of yourself. Like Saundra I was also told my sodium was low and that was making me dizzy on a regular basis so up'd my intake and it's helped me quite a lot.
Donna

So glad to hear you are ok, what a scare for you tho.

OH Lauren!! How scary. I am so glad it wasn't all of those scary things. I am glad you are okay. Please take care of your self. What beautiful sunflowers!
I am so glad you are feeling better.

How scary Lauren...glad you are okay and have gotten a lot of good advice from your friends...the field of sunflowers is amazing...we are currently doing fundraising at work for a nurse with glioblastoma...it's a terrible cancer like so many...now...where are some pics of that new four footed friend???

Hi Lauren! So glad the dizziness wasn't from a stroke or anything life threatening like that! So scary! One thing you should consider is your cell phone. I've been doing lots of research about the effects of EMF on your system. One of the side effects is dizziness...along with a bunch of other side effects... check into it and consider using the speaker option when you need to use the phone... hugs!

So glad you are ok and all was fine. Whew! I get vertigo periodically and have had at least one episode that was pretty bad. Not fun!