I took a quick trip this morning about an hour south to a primitive antique show, Back to our Roots.  Overall, things were much too primitive for my taste, but of course I did not come home empty handed.

I got the sweetest toy sewing machine from hooker friend Karin who was set up with her daughter Gabriella.  It is about 50% bigger than any of my other toy machines.  Cast iron and HEAVY.  Also some blue and white ticking, a Peaseware jar and a couple pieces from a red coverlet.  The coverlet pieces are much heavier and coarser than the usual overshot coverlets. 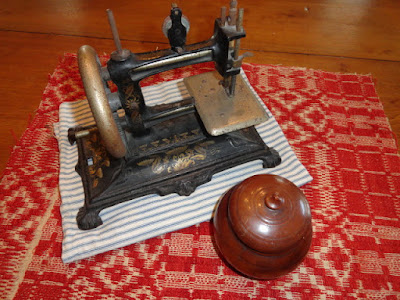 The machine has wonderful graphics. 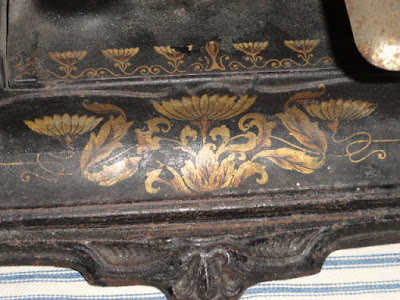 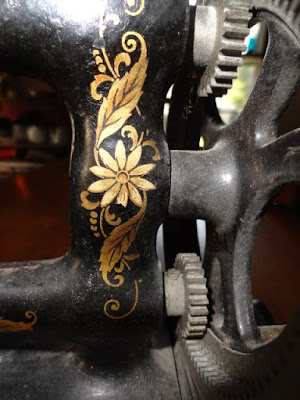 The Peaseware jar is just slightly smaller than another jar I have by the same maker and has a shinier finish.  What a coincidence that this was bought from another hooker friend, Teri of Western Reserve Mercantile. 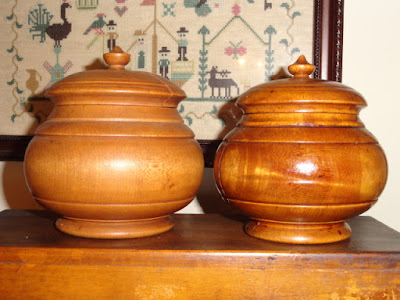 Gotta run :)  Hope you are having a wonderful weekend.
Thanks so much for stopping by.
Pug hugs :)
Lauren

Hi Lauren,
Such great finds!!!!! The sewing machine is so sweet and love the peaseware and of course the coverlet is just wonderful!!!!! Hooray for you!!! Hope you enjoy your weekend!!!
Heart Hugs~
Julie

Oh, am I jealous??? You betcha...what a terrific bunch of goodies. Here in CA, it is next to impossible to find primitive stuff. But then living up here in the high desert doesn't have much of that to offer. You did well.
Enjoy the rest of the weekend and I do not know how it could possibly get any better.
As always, Peace, Barb

That is such a fun find. I never got a chance to hit the antique stores and always fun to shop in other states.

Wow, those finds are awesome! You had a very successful day. I think I need to visit antique shops more

Well of course you wouldn't go back home empty handed. I've started collecting things to take to a local auction. These are items which I'd rather not take to the thrift shop but get a little something for them.

What a fun little machine! You find the coolest things. I like your jars too and the coverlet is nice.
I hope you have a lovely Sunday.

Very nice!! I love your wooden jars. I've never seen anything like that here in California.

Oh how I love your toy sewing machine and pease ware jar! I've admired both of those items for years, but haven't purchased... yet!
Blessings, Patti

I don't make the trip to those great shows because I assume everything will be just too pricey. Most of it because of trend, not value. You always happen to find something nice.

Love this little machine! The details are exquisite!

Oh how darling is that sewing machine!