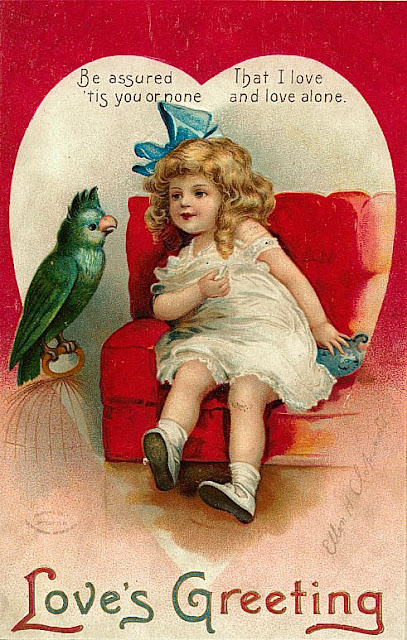 What Nots, an antique adaptation by the Woolley Fox, was started at the Heavens to Betsy Shaker Village rug retreat in July of 2012.  Upon returning home it was set aside until 2014.  I finally finished it in June of that year, rolled it up and there it sat until last week.  FINALLY I decided it needed to be finished (well, except for the label . . . sigh).  Here it is, hooked, bound and steamed.  I don't hook really big rugs, and this is the largest rug I've hooked to date.  It's 23 1/2" x 41", hooked in a 9 cut.  The colors are much richer in person.  They are quite accurate in the second picture. 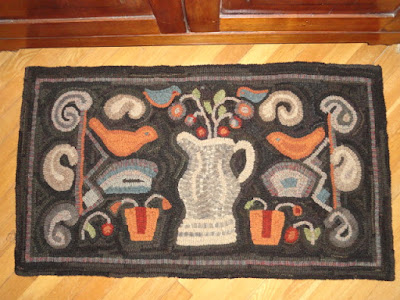 I think it will reside in the living room in front of one of my favorite antique cupboards.﻿ 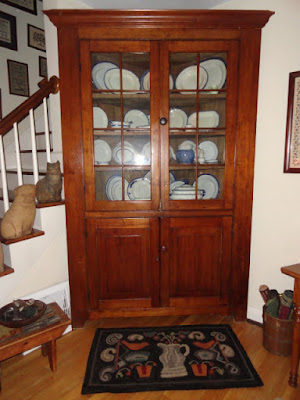 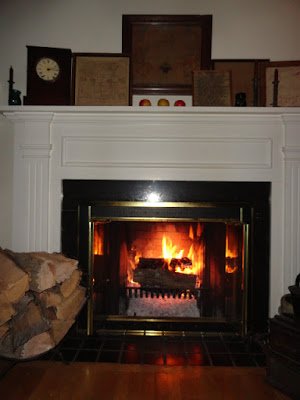 Thanks so much for stopping by.
Pug hugs :)
Lauren
Posted by Rugs and Pugs at 7:53 PM

I lost followers and then I got a couple back then today I lost a lot more. I think it is google doing something. I love your rug and your cozy home.
Cathy

Wow your rug is beautiful.

That rug is gorgeous! Love it! Worth all the wait. (I'm sure I've lost followers, what with my knitting taking over.)

I lost a bunch too :(. I'm glad to know it wasn't just me. I don't know why it bothers me so much. I really like that rug and the colours. Worth the wait

I remember when you started that rug. Gosh I can't believe that it was 2012 when you started it. I think it looks wonderful in front of that cupboard. Did you read Julia's post that blogger was doing some kind of updating and some people would be dropped? I guess we have all been feeling that way, it gets to me as well.
Have a lovely evening in front of that nice fire.

I hope you haven't lost me yet... I lost another one today and like I was telling Saundra, I went and wrote down all the name I had in my followers list so i'll know who Google stole away from me. So many I don't know who hey are but they were on my list. I'm down to 169 the last time I look. At least, you still have tons of followers.

Your rug looks perfect in front of that antique cupboard.


I remember you working on that rug. yea for you finishing it. It's a satisfying feeling.

Wow, your What nots rug is beautiful!!!!!! Frankly, I kid yora bet er with the cclor vs all neutrals.

I am losing followers too, it has to do with people who do not have google accounts, from what I heard. Love your rug and it looks beautiful in the room. I still have rugs to bind, guess I should finish them, I do enjoy binding, and something fun to do when I watch movies.

Your rug is absolutely beautiful! I think it looks perfect in front of your cupboard.

Love your What Nots rug! Great pattern & the colors are awesome! Aren't you glad you hooked a BIG rug?? It looks stunning in front of your cupboard!!

So glad you finished that beautiful rug !
Do I see a group of samplers hanging along the stairs ? Just beautiful !
Rose

Lauren, your rug is WONDERFUL!! I love the look in front of your cupboard. Congrats on your finish:0)

Curtains in My Tree said...

we are all loosing followers due to something in google friend

Wondered why I wasn't getting your blog in my email. Have you and Saundra on my bookmarks toolbar. I am not planning to get a gmail account.

Hi Lauren, I have lost many followers, I know I'm boring but come on...love the rug, you are so talented, always so beautiful.... The fire looks so toasty.Blessings Francine.

I read another blogger's entry earlier today, no one who has already commented here. She has had the same issue with losing followers. Strange. I love your new rug and where you've put it. ... jan

Hi Lauren,
Your rug is just STUNNING and looks so wonderful in front of your cupboard!! I would be so scared to walk on it!! lol
I have lost followers too and know it is due to Google, not me, so guess we are all in the same boat!! Hopefully, those who want to still follow us will figure out the best way for them!! Just keep posting and they will come!!
Take care and DO STAY WARM!!! Would love to join you by that amazing fire!!
Warm Hugs~
Julie

LOVE how you did that heart in the prior post. WOW - I wish I could snap one of those out in the next couple of weeks but alas I have too many irons in the fire as usual. your big rug is so wonderful, looks just great in the spot you chose. That fire sure looks cozy. hope you enjoy your weekend - Mel

Your rug is awesome and the hearts are sweet...
Love it all, keep warm that fireplace looks very inviting.

Your rug looks great! I've noticed I have lost some followers too.

I love the rich colors in your rug, too. And that cupboard is to die for. Do you whip and bind or just bind? I do a mix, but really hate to whip even more than binding.

Thanks so much for your informative writing. When you are considering Buying Rugs Online or from a mat shop, odds are you are feeling a little overpowered by the greater part of the decisions, carpets come in numerous sizes, hues with various sorts of strands in addition to the diverse ways they are made, these are a percentage of the things you have to consider preceding buying your floor mats.
Get 30%-70% Discount from FZillion.com on all branded Rugs .