I am a master at frittering away the day.  I was going to go play (antique) today, but got too late a start with grandson here, so after taking him to his dad's, I thought I'd get so much done.  Oh, the best laid plans of mice and men!
Last night Jake and I went to Boo at the (Cleveland) Zoo.  It was a beautiful evening with temperatures in the 60's so we were very lucky.  Just a few sprinkles started when we were making our very long trek back to the car.  (Sorry for the lousy pictures!) 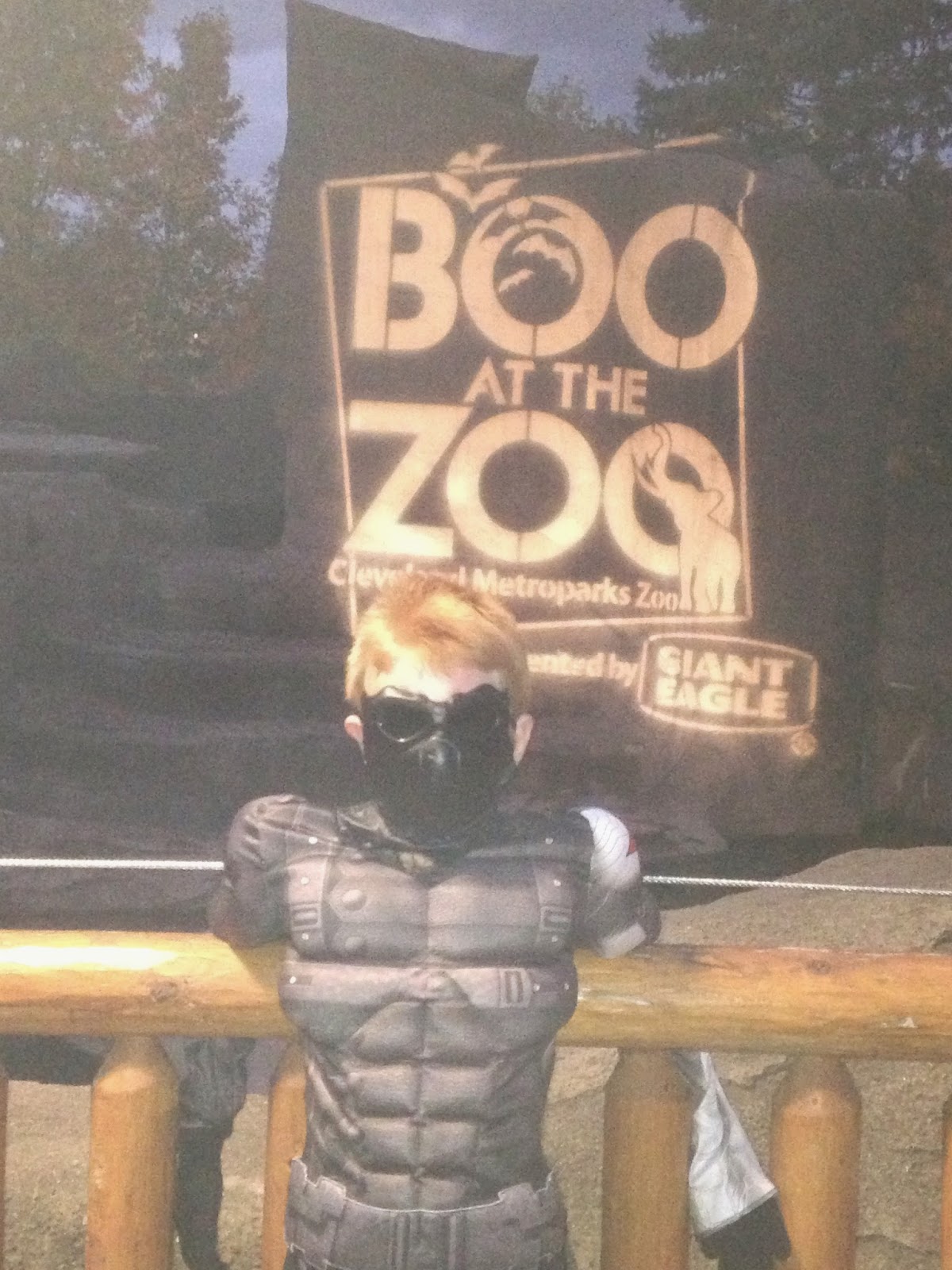 The Koala exhibit is one of my favorites.  They had just brought him out a bit earlier so he was sitting in a tree munching on some leaves. 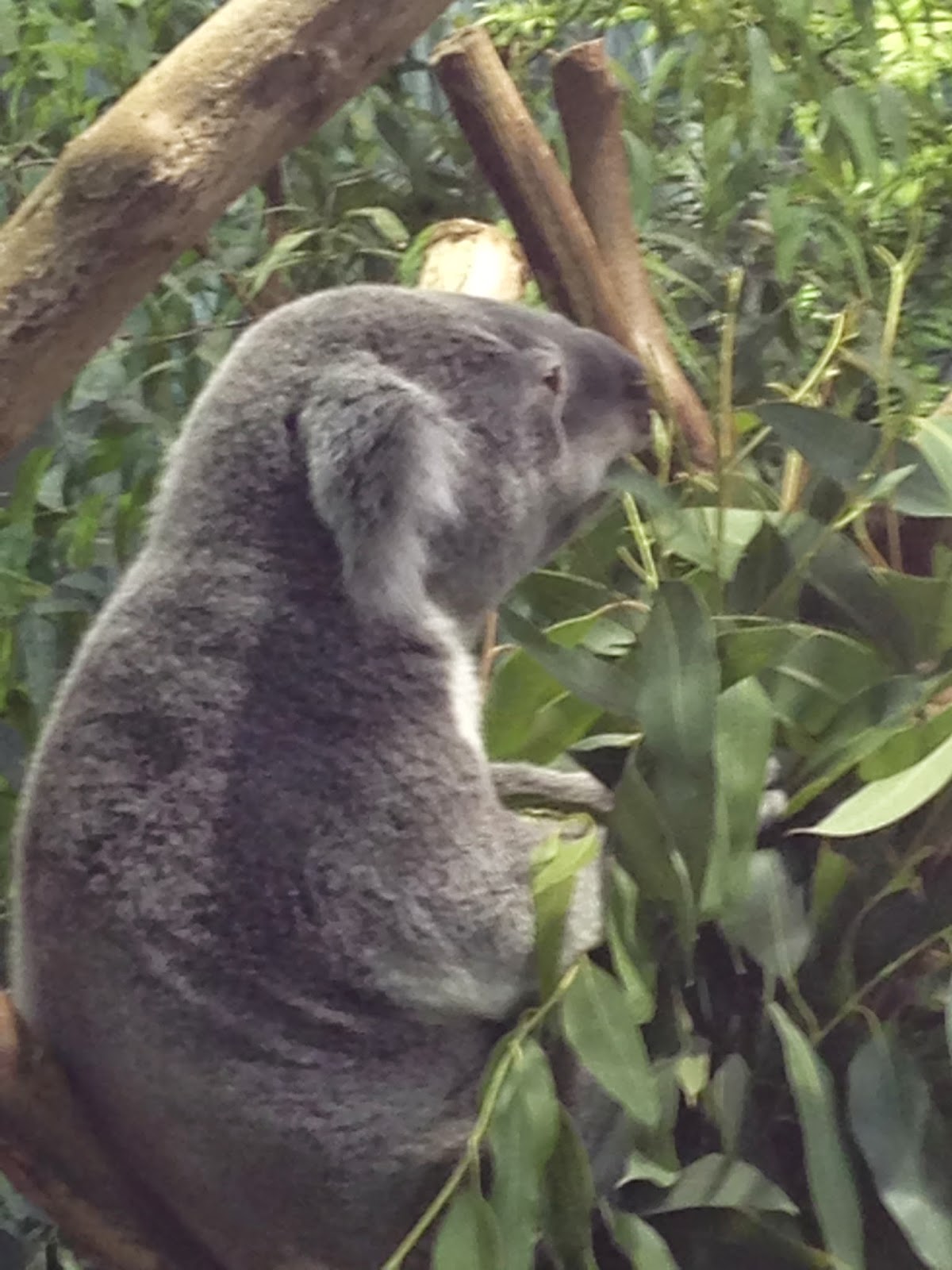 New to the zoo this year is a carousel with the most wonderful carved animals.  Jake chose to ride the shark . . . 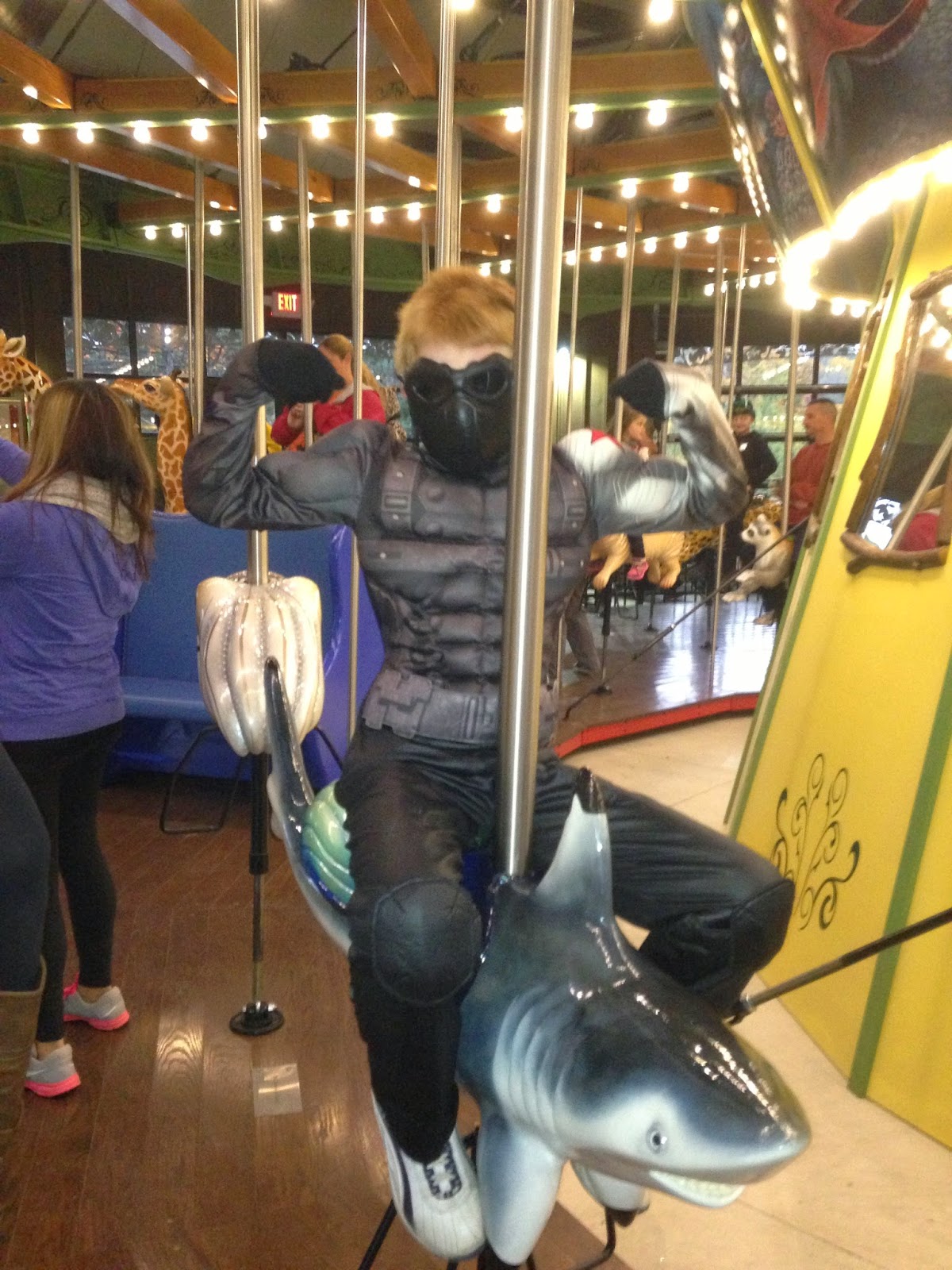 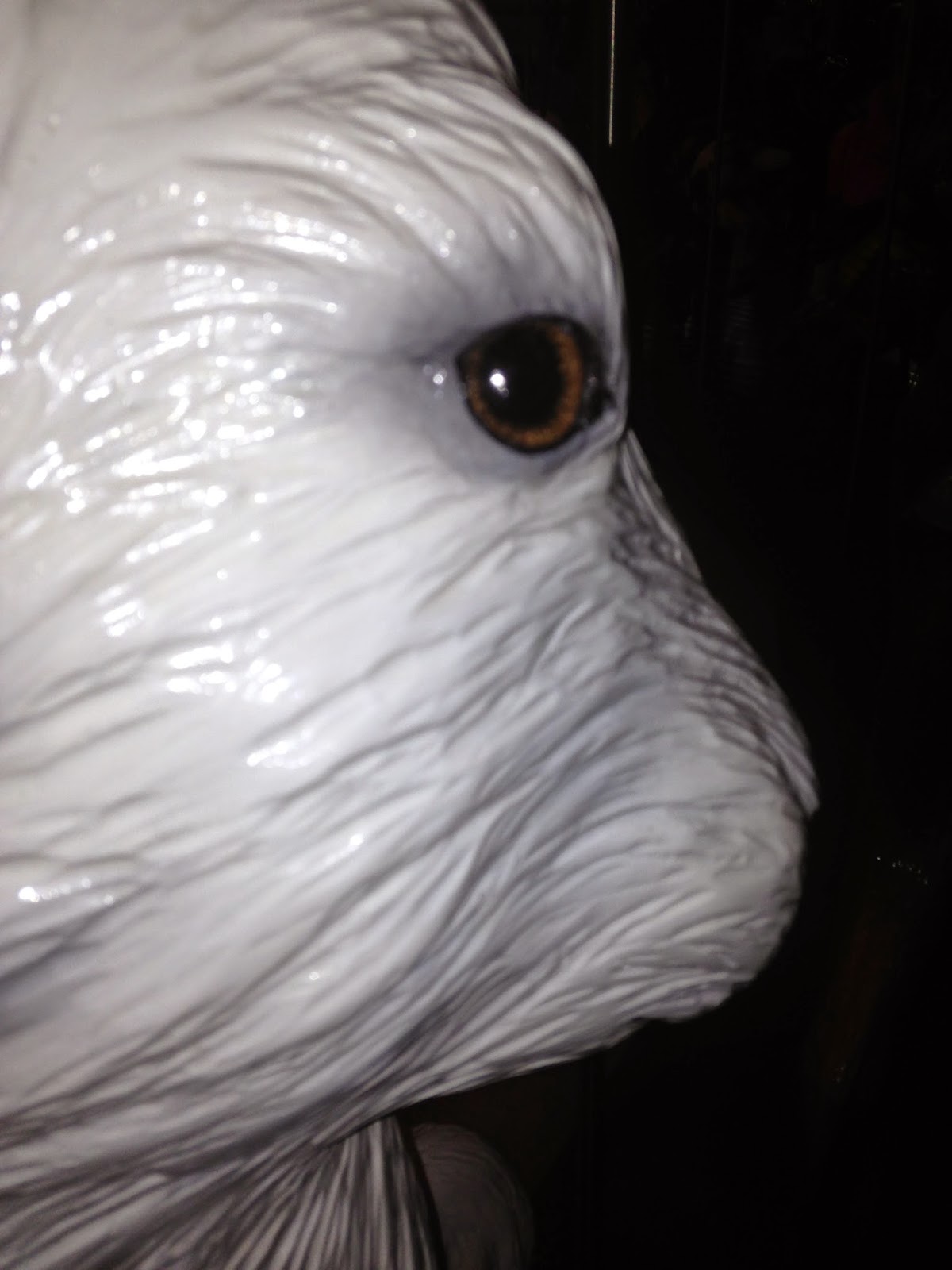 This was a really cool "glow" show.  It was in a dark room and the characters were wearing black clothing outlined in lights is the best way to describe it.  It was really fun.﻿ 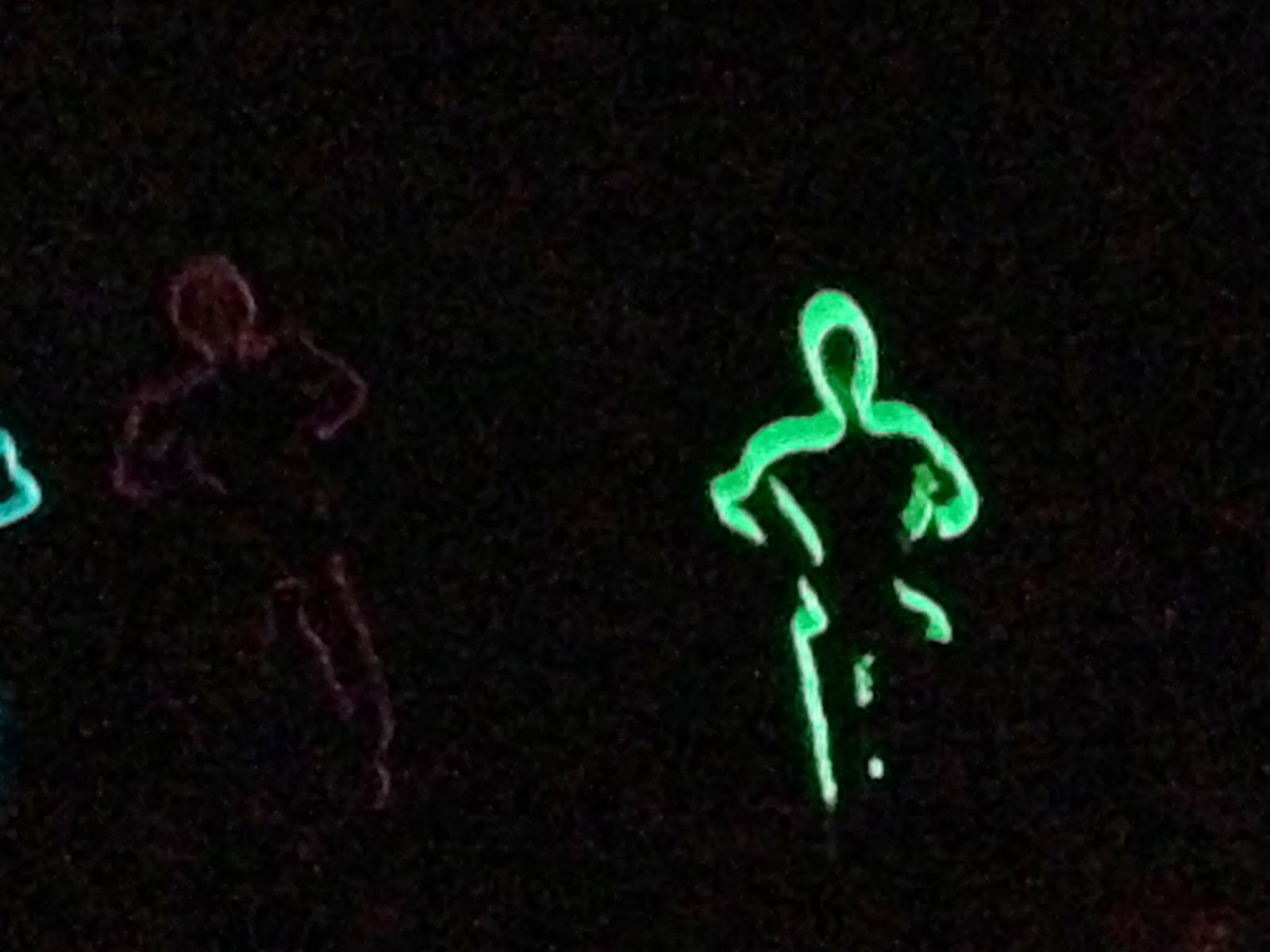 Here is the progress on my Santa and Sheep rug.  Not as much as I had hoped for, but at least I've gotten a bit hooked.  My goal was to finish hooking all but the outside border this weekend, but I don't think it will happen.  This darned machine just sucks me in and uses so much of my time . . . sigh. 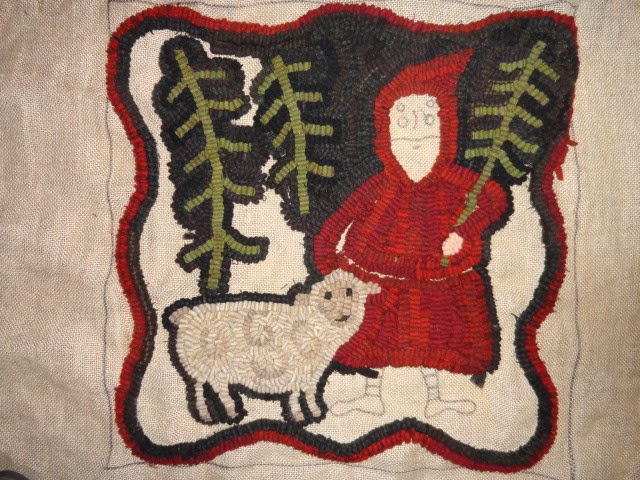 Thanks so much for stopping by.
Pug hugs :)
Lauren﻿
Posted by Rugs and Pugs at 4:28 PM

To me, the zoo is more fun than stitching so you made a good choice!

The Zoo was the way to go with your grandson and a handsome and powerful dude he is... look at those abs.
I bet he felt powerful.
How fun to ride a rabbit and him a shark. You have lots of rugs anyway. This playing stuff is more important. Life is really short, I know... I'm getting old.

Have a great week.
Hugs,
JB

Looks like you had a really good time with your grandson...so nice of you to take him places..I'm sure he thinks the world of you!! Those kids grow up so fast!!

Boo at the Zoo looks like a great time...love the shark choice...memories are much better than hooking....

You and jake always have so much fun. You're a great grandma. I love that rug. I've wanted to hook it for awhile

I LoVe the rug you are working on. Grandkids are sooo much fun, and they grow up so fast. You are lucky to have each other.
Hugs Marg.

Looks like a fun way to spend the day, we have a zoo that is doing lighted pumpkins along the walks. Your santa rug is beautiful.

I think that looks like a very fun time. I am so aware of this machine too. I could get so much more done if I didn't want to know what was going on in the world. :)
Maybe you can have a good day hooking tomorrow. :)

What is the name of the zoo ? I loved all the pictures it looked like so much fun! Hugs cheri

Time with a grandson is well spent time. A fun day at the zoo is a day to remember for both of you. Santa rug is gonna be great!

The zoo looks like fun and with Jake why not. I am on the computer wayyyyyyy to much and it sucks up all of my free time.
Cathy

Looks like it was a fun time at the zoo!