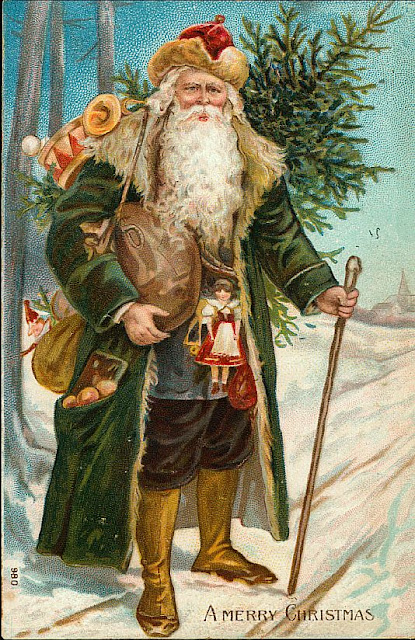 Thank you for the suggestions on how to deal with my Picasa storage issue.  I kept trying to see if the problem would self-correct but continued to get the message that I was out of space even though I was supposedly only at 19% capacity.  The picture size I upload is very small and should not even count.  I choose not to delete photos from old blog posts.  I know it's silly, but I want to leave old posts as they are.  With that being said, Google is now getting $2.65 a month so I can upload photos.  I guess it's a small price to pay when you have the "blog addiction", but I'd rather have it in my pocket than Google's :-)
* * *
I had so much to be thankful for this Thanksgiving holiday.  Older son Bill and girlfriend Melisa were able to make it from California. 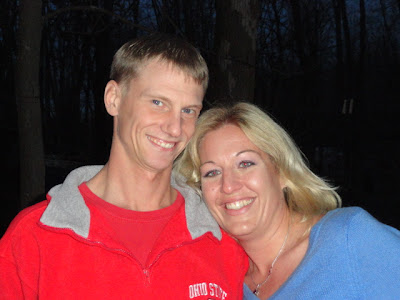 Younger son "J" and girlfriend Jessica spent the holiday with us. 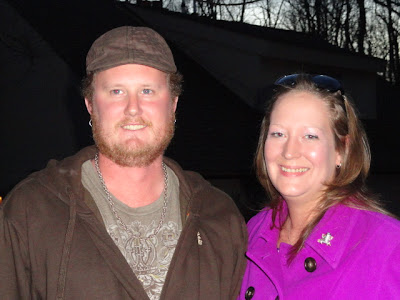 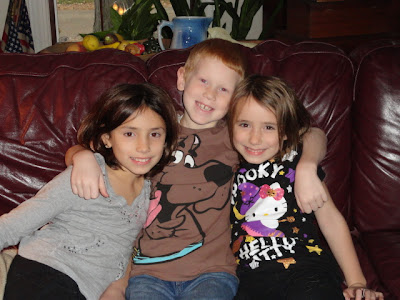 Niece Elise and hubby Michael have a holiday tradition of spending Thanksgiving in Ohio.  They have been coming from Chicago for at least ten years. 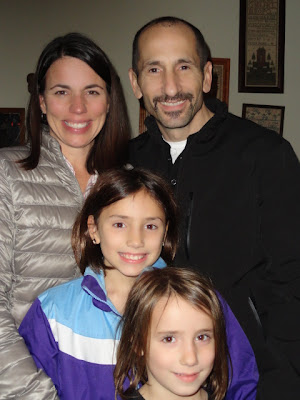 Thanksgiving dinner is always at my brother Bill's and SO Lyn's.  I think my brother was having as much fun as the kids ~ giving them what he called a "bucket ride". 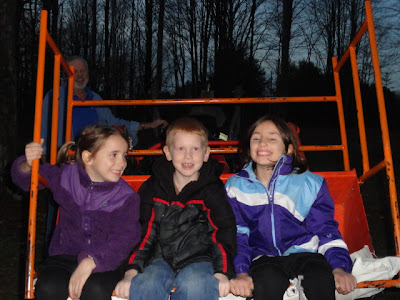 * * *
Very early Sunday morning after dropping Bill and Melisa at the airport, I was heading home on the interstate.  I hit any icy spot and started to slide.  I'm not sure what I did, but I had no way to stop.  I crossed three lanes of the highway and slammed in to the concrete barrier dividing the north/south lanes.  I may not be the most religious person, but I do believe Someone was watching over me.  Crossing three lanes of traffic could have been catastrophic, but no other vehicle was involved.  I was not injured.  The damage to the vehicle was relatively minor but it would not run and was towed home.  I am so very, very lucky and for that I am most thankful!!!

I am also thankful to have such wonderful blog friends.  Thank you so much for stopping by.
Pug hugs :)
Lauren
Posted by Rugs and Pugs at 9:11 PM

Oh I am so glad you were okay. How scary and how terrible. That is such a scary story. I love all of your photos. They just looks like you had such a nice time with your family.
I hope you aren't too sore.
I am so thankful you are okay.

Lauren - so happy you are okay! You are so right - it could have been so much worse! Glad you were able to spend time with your great looking family! Love all those smiles! Now you rest up and while your resting you can work on that tree! LOLLLLLL Miss talking with you1

Hi Lauren, I am so happy to read that you are okay, it is frightening to drive on black ice, especially when you don't realize it is there. I do believe you had an angel watching over you. Hugs from Maine, Julie.

Hi Lauren, my gosh, that must have been so scary,happy your o.k.......nice family pictures and so wonderful they all had Thanksgiving together.....that's what it's all about.....Blessings Francine.

Oh my goodness Lauren, I'm so glad you are ok! That must have been so scary!! Big hugs, Lori

So nice you were able to see both your boys for thanksgiving.
I am so thankful you are ok. You do have much to be thankful for.
Cathy

Looks like a wonderful family gathering. So glad you didn't get hurt in your accident.

How awesome that is that you were uninjured !! God is good !
What a wonderful family time you had !!
Robin

Oh Lauren, I am so glad to know you are safe. Good luck with car repairs too. Kathy

So happy you had a wonderful Thanksgiving with lots of family...and especially happy you are safe. Yikes!!! How very scary! Thankful it ended well!
Robyn

Oh my gosh, Lauren! You are one lucky girl!! So glad you are okay! A crazy end to a wonderful thanksgiving weekend! Sounds like it was fun!!! I've been down the google road before ~ no answer but to anty up!! I don't get it!! Well, yes, I guess I do!!

So glad you are OK Lauren! Life can change rather quickly. Looks like you had a wonderful Thanksgiving!

I have been getting that same message and can't possibly out of storage as I have only been blogging a couple of years. I have spoken with bloggers who have been blogging lots longer than I and they have never heard of such. I am trying to wait it out as it happened once before and then corrected itself.

Glad you are OK Lauren! Very scarey..You have a lovely family glad you could spend the holiday with the ones you love.Warm Blessings!~Amy

Glad to hear you are ok.. amazing isn't it how quickly our lives can be changed.

Yikes! Glad you are o.k. and your trusty steed is fixable. Hope to see you tonight for hooking at the farm.

Hi Lauren, such a scary thing to hit black ice and get out of control in a split second. It's that time of year... I'm thankful that you weren't hurt but sorry that your car had to be towed. How so lucky that there were no cars driving in those three lanes at the time.

I hope that you have your winter tires on your vehicle now and that you could get it started.

Having family together is so special at Thanksgiving and I'm glad that you had a great time together. So nice seeing your family and look at that Jake with his cousins... so sweet.

Thank God you are okay Lauren and the only damage was to the car...scary stuff!my heart is beating faster just reading about it...

What a wonderful family gathering you had this Thanksgiving...thanks for sharing all the sweet pics...

Clearly you had a wonderful Thanksgiving...and I am so glad that your auto mishap, as scary as it must have been, turned out to be minor.

Wow what a scare you had! I am so happy you are ok. It sure could have been so much worse. You had an angel on your shoulder, as my mom would say. Glad you had such a great Thanksgiving. Beautiful family!

Lauren, I was holding my breathe reading about your accident. How scary! I think you did have an angel watching over you. Thank goodness :)

The Joy of Needlework said...

Love your blog and always enjoy returning to read what is new. Have a Joyous Christmas. LenZie

Hi Lauren, I once slid on ice in the mountains and I have never been so scared in my Life. Someone was watching after You, Hugs Cheri