I am not a bus trip person.  I went on one about 20 years ago to Toronto to see Phantom of the Opera and Miss Saigon.  After that trip, I decided if I was going anywhere, it would not be by bus.  Well . . . never say never.
A little background.  I finished 8th grade in 1966.  Catholic school for 8 years.  There were 50 of us in the 8th grade class, and mind you, no teacher's aid, no other teacher (music, art, etc) whatsoever.  My second and eighth grade teacher was a Sisters of Notre Dame nun, Sister Mary Saint Patrick.  She has since taken her maiden name and is now Sister Marian Coughlin.  A few of my former classmates got together to reminisce and discovered that Sister was still alive, living in the Notre Dame facility about an hour and a half from here and arranged a trip.  Surprisingly only one person from our class is deceased.  I believe 15 of us went to visit her yesterday.  I'd say that was a pretty good percentage, and there were three others who at the last minute could not make it.  We had heard that sister was very excited that we were coming.  She was waiting for us at the door when we arrived :)
The day was started by going to Mass.  Sister even did one of the readings. 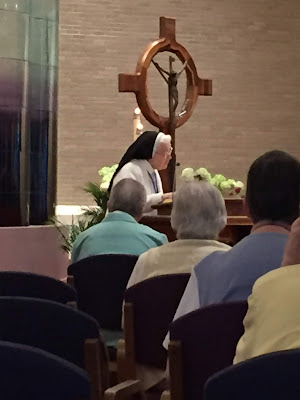 She is just a tiny little thing.  We all remembered her as being much taller . . . or was it because we were just much shorter? 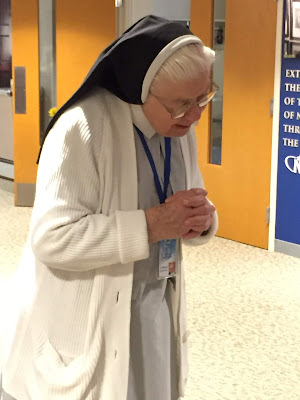 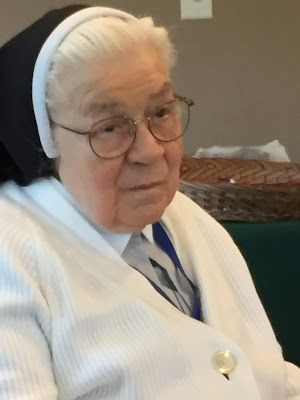 Sister is turning 90 in July and also celebrating her 70th year as a nun.  Her mind is still sharp as a tack and she remembered all of us. 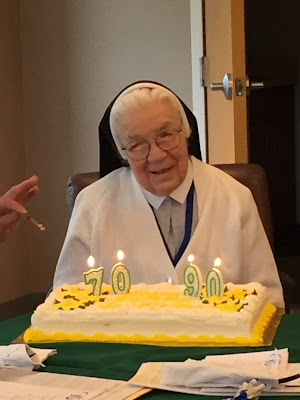 This is one of our classmates from school, Caroline.  In 1966, at the age of 14, she went to the convent and has been a nun ever since.  She is now known as Sister Valerie, though we still called her Caroline (with her blessing). 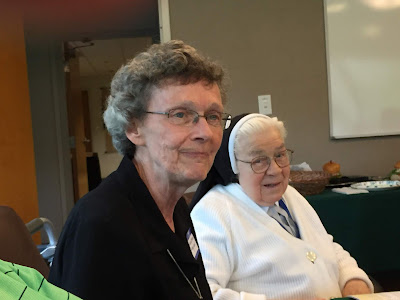 Even though Sister uses a walker, she came to the bus to wish us a final farewell.  A few tears were seen streaming down her face.  What a heartwarming visit. 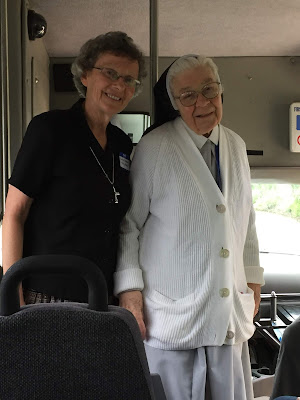 Off to bake pumpkin rolls.  Not one of my favorite things to do, but grandson Jake and I are leaving Wednesday evening to visit my son Bill in Las Vegas.  I'm not sure which Bill is looking forward to more, seeing me or getting pumpkin roll :)
Thanks so much for stopping by.
Pug hugs :)
Lauren
Posted by Rugs and Pugs at 1:39 PM

That is such a sweet story! I didn't know you were a Catholic School girl! Off on another trip?? Goodness...you sure have done a lot of travelilng!! Have fun Vegas and don't eat too many pumpkin rolls!

I'm not Catholic but what a wonderful birthday tribute and fun visit of the past. Shame the other girls didn't get to go and join in the fun too.

How wonderful you got to see her again. My husband went to catholic school but he was naughty and the nuns did not like it so I am sure they never want to see him again.
good luck on your trip and the pumpkin roll.
Cathy

This post was so heartwarming! I’m so glad everyone went to visit these two special ladies.
Now about that pumpkin roll - yummo !!
Have a wonderful visit.
Rose

What a heartwarming visit for your classmates to plan. What a special day for her. And her students!

How nice of you to visit your old teacher. I went to a Catholic school too...one nun for everything, except I did have a different one who taught me how to write left handed correctly. She was a lefty too! I know you made sister very happy with your visit. I may have to start calling you the roadrunner though. California, bus trip and now Vegas. :-) Janice

What a lovely road trip...safe travels to Vegas.

Lauren, what a lovely story and I'm sure you've all made Sister Marian very happy with this special visit.

I didn't know you were Catholic either. So am I. It must have been very nice for you too to see all those classmates. I was 20 years old and got married in 1966. I can't believe Ill be 72 in November.

Have an enjoyable trip to see your son in Las Vagas. It's nice that Jake is going with you. I'm sure Bill will love seeing you more than the pumpkin rolls. The rolls will be the icing on the cake , like they say.

Those wonderful women from Chardon! I taught for them for many years. A certain Sr. Mary Edward gave me my first job in Florida and sent me to the local realtor to help me find an apartment. A few years later I married that realtor turned lawyer! When I had Annie, Sr. Edward was one of my first visitors. We wrote each other when she returned to Chardon years later. She made me a teacher...American University educated me, but Sister Edward turned me into an educator. Loved reading this story!! I know you gave sister a day full of pure joy! I am grateful every day for the fine education I received from the Sisters of the I.H.M....kindergarten through high school.
Enjoy!
Robyn
p.s. When my husband was sworn in as Clearwater Bar president years ago, when he introduced me he told the crowd a nun sent me to him. How's that for "divine intervention"?

What a wonderful visit. I got all choked up. I bet she was so happy to see you and what a nice visit. That would be a nice visit and getting to be with those girls too. Have a fun trip. Is it a long trip to get to Las Vegas? From your house? Be safe.

What a wonderful day with your fellow classmates and such a heartwarming surprise for her.

How neat is that! So special so many of you could go and visit with her and so neat she remembered you all. Thanks for sharing such a heartwarming story.

interesting - the catholic school my DH and I attended in our neighborhood had nuns from the Sister of Notre Dame - I learned more there in the 3 years I attended than I learned in all 8 of my other years in school. People who enter into the convent to devote their life to service certainly have to be admired. There is a catholic hospital near my office and I see the nuns walking back and forth every day. what dedication. Hope you have a great trip to visit DS. Mel

wow !!! beautiful and so lovely work :) i really like your good idea so much.Thank for sharing.