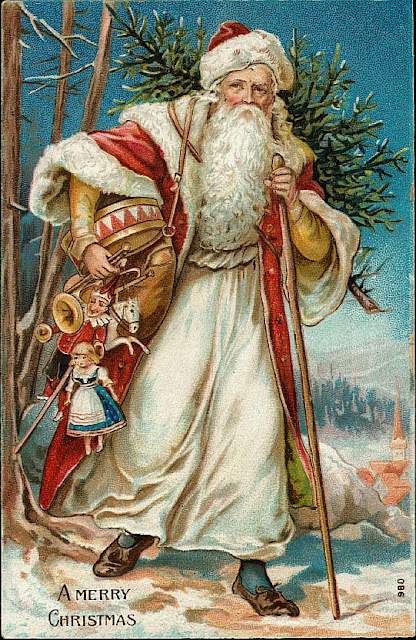 If you've been a follower of my blog, you know that I LOVE TubaChristmas.  Yesterday's performance did not disappoint.  This was the 22nd year it was held at our Palace Civic Center, but it has been around for 40+ years.  This year's tuba players ranged in age 11 to 74 and one participant came all the way from Las Vegas.  His tuba was from 1914.  The number of tuba players appeared a bit smaller this year (they did not tell us how many) but the audience was by far the largest.  I was hoping to add a little video I took, but it would not load properly :( 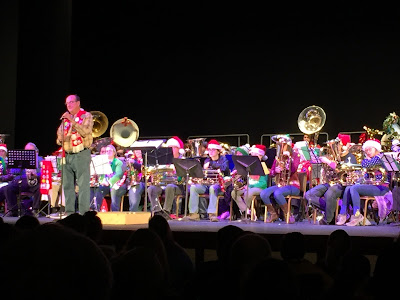 I finally finished Jolly, another fun little mat from Star Rug Company.  He is just too sweet. 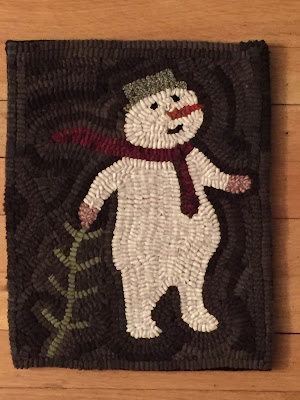 At a primitive show this fall, I saw this tree but would not buy it.  My BFF kindly purchased it for me.  I just think it's a hoot, made from old funnels. 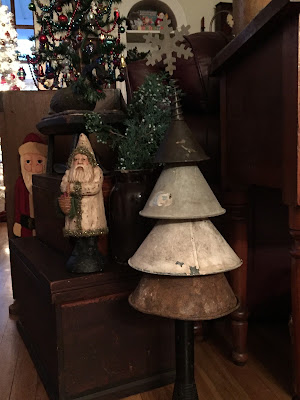 The Christmas season does fly by.  It's hard to believe in just a week we will be celebrating.  I do believe this has been my most stress free season ever.  It is a good WONDERFUL feeling.

Thanks so much for stopping by.
Pug hugs :)
Lauren
Posted by Rugs and Pugs at 7:57 PM

Hi, Lauren, I'd love to know your stress free method. Even if I start shopping in July, it's still stressful. I don't know why, it's not like I have tons of people to shop for and lots of entertaining to do. Tuba Christmas looks like fun. Do you have snow up there? When do you think you will get a new foster baby?? Looking forward to seeing Ernestine in her Christmas finery:) Melinda

Retirement certainly helps with lowering the stress level. Merry Christmas to you and yours Lauren

My friend makes those funnel trees. They are a hoot! Love your snowman mat. Working on one myself right now. Janice

That tree is fun and clever idea. Love your snowman piece.

Hi Lauren,
So happy you are having a stress-free holiday!! May it continue!!! Your concert sounds so fun!!!! Love the sweet snowman and the funnel tree is awesome!!!
Hope you have a great week and a Wonderful Christmas!!!
Christmas Hugs, my friend~
Julie xo

what a concert, my brother played the tuba and was invited to The All Ohio Boys Band for a summer. Just imagine what our house was like, one brother on the tuba, another on the drums and me on the piano. lol supportive mom! love the oil filter tree and your snowman!

I always wish I could go see a Tuba Christmas. I think that would be so much fun. That is a very cute mat. I am with you, this has been once of the nicest, stessless Christmas times ever. Have a lovely day.

Love, love, love that snowman! And what a cute tree! People are so creative. LOL Okay, no glasses this morning...I read TUB A Christmas...my first thought was, yes, I need to get some big tubs to put my Christmas stuff in. LOL

My planning has been a stress free...but I think it's because I'm forgetting something. LOL

I adore your funnel tree !Some people are just soooo creative.
Every year you talk about the Tuba Christmas.
It sounds so wonderful ! A great 'tradition'. Love your snowman rug hooking.
Rose

Valuable information in your blog and I really appreciate your work and keep it up dude I really very informative blog about the rugs well done.
rugs