Well . . . finally.  I pulled the last loops on Daisy (pattern by Spruce Ridge Studios) a bit ago.  Geez, I started it back in the beginning of February at the Sauder Village retreat.  It's about time she's done.  She measures about 32" x 20" which for me is a rather large pattern.

I decided to keep the "donkey balls" that I blogged about here.  I guess just because it makes me laugh. 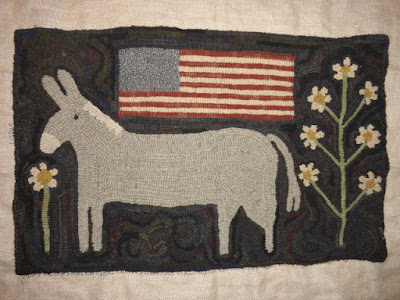 This is the wool used for the flag canton.  I didn't want to try to hook stars, so I thought this would give the illusion of stars.  I'm not sure I like it.  It looks a little blah to me.  Perhaps I could get a big rusty star and sew it on if the rug will only be hung and not put on the floor.  Thoughts?  Suggestions?

(I'd love more of this wool if anyone knows of a source.  I just had a small piece that was given to me several years ago and I've never seen it anywhere.) 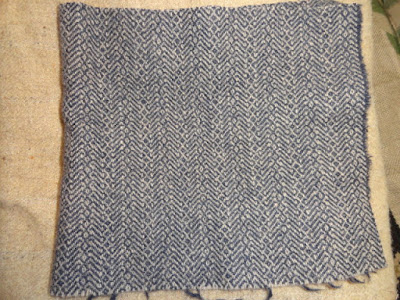 I used maybe 7 or 8 different blacks/blues/dark reds/dark greens for the background.  I do like the look it gives. 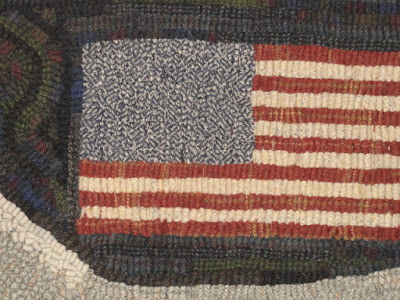 Rebecca Erb has some yummy new wools.  Of course upon seeing them at hooking I could not resist purchasing a few.  Such soft, muted colors. 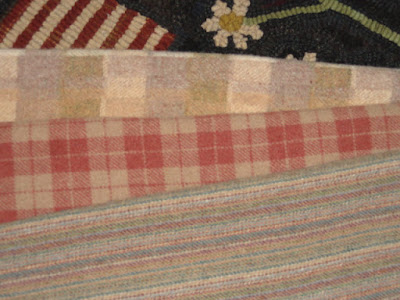 I wish I had my next project planned, but do not.  I have so many patterns on my bucket list ~ some already on linen, some ready to be put on linen, some in books, some just in my head.  I really hate when I don't plan ahead because I tend to procrastinate and have nothing on the frame . . . sigh.

Thanks so much for stopping by.
Hugs :)
Lauren
Posted by Rugs and Pugs at 9:48 PM

Daisy is beautiful!! So is that yummy background. You know that lovely wool you sent me? Well I have used it in about every rug I have made since then. I think that I wish you would buy wool for me you have such an eye for it. The wool you sent have made my rugs have more movement. I always see that in your rugs and it just make every thing alive. I am in the same quandary, so many rugs and so little time. I am having trouble deciding what is next. Have a lovely Tuesday.

Hi Lauren,
I love your Daisy rug! Great job and the background is wonderful! It is so amazing how those colors can change when you hook them! I have not hooked anything lately and need to start the rug that is all ready to go!!
Hope you have a great week!
Warm Hugs~
Julie

Lauren your rug is beautiful I love the colors you chose for the wool background especially. Glad to see you hooking and enjoying your time spent doing hand work.
Blessings to you
L

I like the flag, Lauren! The rug is great! Love the movement in the background. Hugs, Lori

Wish I could help with the canton wool. I have done a similar thing with a canton using wool that Polly Minick gave me; or maybe it was in a kit I purchased from her.

Another finished and ready for another. Like you I've many rugs waiting to be hooked. Some are huge.....like the Stubbs Runner by Woolley Fox.

I've been anxiously awaiting the finish of Daisy. Wanted to see her tail just one more time. LOL
Love her!

I love how it came out, looks beautiful just the way it is. Not sure on that wool, I know I have a few gray textures, I really need to go through my stored stash and organize it.

I love him! do you need a rusty star I can help.
Cathy

I love Daisy, balls and all. I think the idea of a rusty star would be the icing on the cake, or the jewelry for the rug.

Can't help you with the blue wool.

Daisy finished up nicely! I love the background and of course the field of stars in the flag... I wish I had mre of that wool your looking for, I'd gladly share with you. Plenty of patterns waiting to be hooked here too... I think I just might close my eyes and pick one, just to get one on the frame this weekend. :-)

Daisy is quite charming. I like the idea of adding a rusty star. I've never seen the fabric you used....interesting. And I adore that beautiful, muted fabric on the bottom of your Rebecca stack. Glad you are hooking again.

Daisy is wonderful...Love the blue used for stars...Daisy balls looks OK to me.
Now I don't have to wait any more...WELL done.

Curtains in My Tree said...

I would proudly use that in my house LOL

Love all the details and materials you used for Daisy

happy for your finish ! now get hooking ! oh and enjoy your holiday weekend - Mel