A couple bloggers have mentioned buying pansies for a flower fix.  I had to stop at Walmart on the way home today and was hoping they would have some, but they did not.  They did have these sweet little hyacinths for only $.98 a pot.  (I need to get some moss to hide the pots.)  Next to Walmart is a Home Depot and I was sure they would have pansies.  Sigh . . . not at HD either. They did have a sweet little Johnny Jump Up in a burgundy/yellow stripe, but I was too cheap to pay $3.98 for one plant in a small pot. 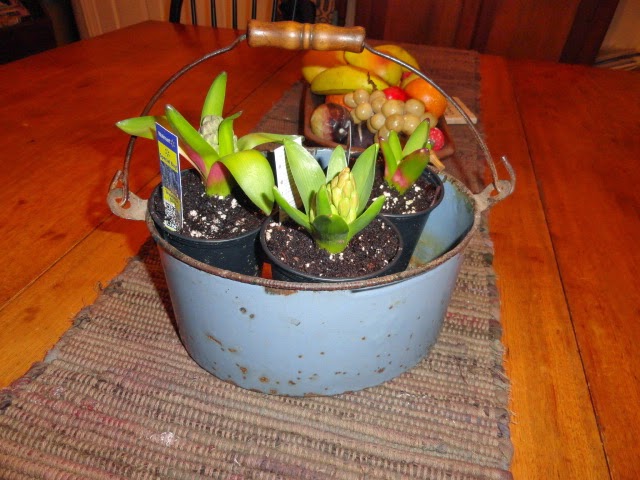 There will be lots of hookin' going on the next couple of weeks.  Tomorrow night the Hidden Hills Hookers meet.  We will be working on a little mat to trade at Katie Allman's hook-in this June.
Saturday is the Wool Yankers hook-in ~ only a half hour or so away.  I almost never get to hook so close to home.

I've made some progress on What Nots, though not as much as I had hoped.  I wanted to finish it before heading to Susan Feller's Retreat in the (West Virginia) Mountains on Friday the 11th. This will be my third year going and it's just a great bunch of hookers.  I think I figured out why I stopped hooking this rug.  It is that big orange bird.  It's just too ORANGE!  I may be doing some reverse hooking.  Another problem is that I have trouble hooking inside the lines and using such a wide cut (mostly a 9.5) the motifs tend to grow. I'm trying really hard to do a better job with that. At least there is a light at the end of the tunnel and even if it's not done before WV, it will be close.  All I will have left to do is background and I enjoy hooking that since it's totally mindless ~and I have very little mind left :) 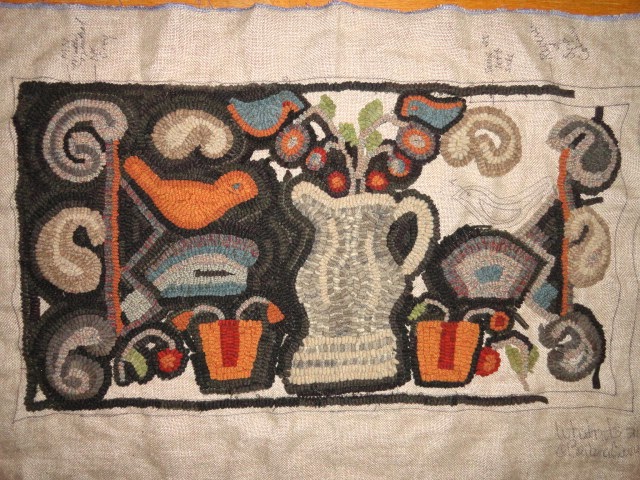 We actually had two days of spring.  We are thankfully not back to winter but it's once again just a little too chilly to be working outside.  (OK. I'm a wuss.)  I took advantage of those two days and started to do a bit of yard work.  Of course, so much more to do but it felt good getting a start on it.
Thanks so much for stopping by.
Pug hugs :)
Lauren
Posted by Rugs and Pugs at 9:30 PM

I'm liking What Nots so far. Keep going, and then decide on the orange bird. I think he's cute :). We had a "snow free" day today so that's a start on spring. A slow start, but a start!

Nice pot with plants! Glad to see your knitting! Enjoy the climate!

Lucky you. Lots of hook ins ! My problem is I don't get much hooking done...I guess I am talking (too much) and admiring others work ;)
Your rug looks lovely !
Rose

You are so lucky to have so much hooking time.
I love that rug the orange doesn't look that bright in the picture. I will be glad when we can see our yard let alone work in it.
Cathy

Morning Lauren, love the flowers, I want some Pansies too, need a flower fix....Great to be hooking so much, love your rug, Blessings Francine.

Have fun and take us along with your camera.

Thats so funny.
I could not find pansies but only some lil bulbs too.
Have a blast. So fun.
Woolie Hugs

Keep going on this rug. The orange doesn't look that bad...
We're getting warmer weather so I hope that our snow will melt.
Enjoy your hook-ins.
Hugs,
JB
Hugs,
JB

Well it sounds like a fun time. I can;t even imagine what going to a hook in would be like.
Your flowers are lovely, we never even found one single pot of H. this year. ( I can't spell today.)
I like your rug. Isn't it hard to hook when you don't like the colors you chose. I am finding that to have really limited me because of before I could see and after. Colors now bug me so bad.
Well have fun and I hope you have lots of spring.

Hi Lauren. Love your new plants. I hope you have lots of fun and laughs on your hooking ventures. Looking forward to seeing lots of finishes.
Blessings,
Janet

Good morning Lauren....love the flowers potted in the old tin. I have some mini daffodils in an old pot too. I planted Pansy's out in sap buckets and they are blowing with the wind today. Have lots of fun with your hooking friends. It sounds like you will.
Hugs Marg

Bet you are having a great time hooking and can't wait to see your progress as well as a show.

I love your orange bird!!! You are having hooking fun!!